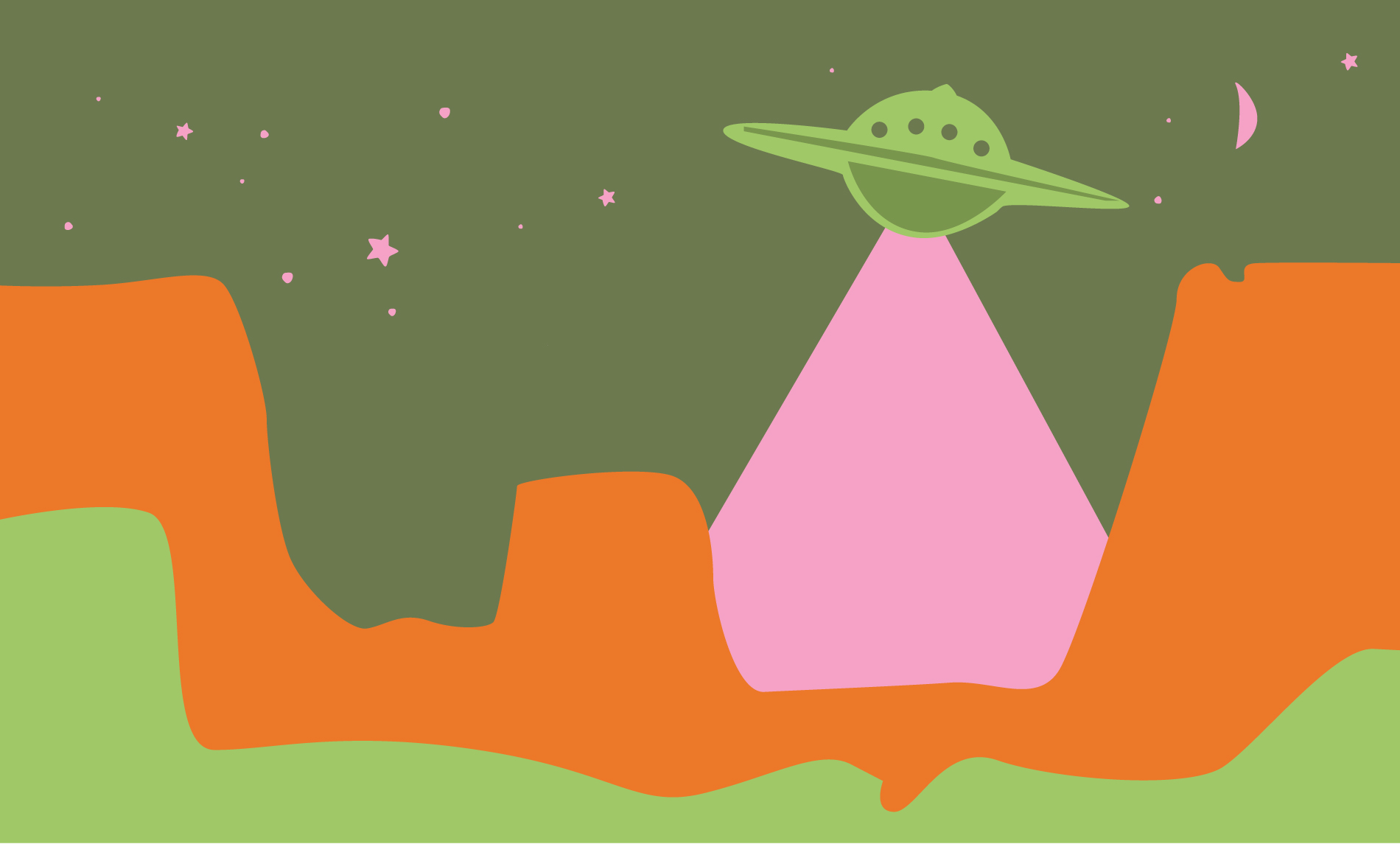 Welcome, Earthlings is an out of this world documentary photo essay chronicling various tourist experiences in the American West thematically centered around UFOs, aliens, and believers. This tourist industry is wholly unique to America: it builds off the mythology of the American West and transports us to outer space, capitalizing on the imagination and wonderment that legendary tales of UFO sightings and alien encounters can bring.

Reports on how many people have seen a UFO vary as much as the storied visitations themselves, but some polling suggests that upwards of half of Americans believe in UFOs, or at least hold out hope for the possibility of seeing one. This extraterrestrial enthusiasm, in turn, feeds a booming tourist industry where participants are steeped in alien mythology, costumes, and merchandise. In Roswell, New Mexico—a city often considered a sacred pilgrimage for believers and travelers alike—alien takeover can be found in peak form, with its city-wide extraterrestrial branding adopted even by the large corporate business chains. By contrast, rural towns such as Rachel, Nevada (population: “Humans—Yes, Aliens—?”) might cease to exist if not for its close proximity to Area 51, ushering in travelers far and wide hoping to catch a rare glimpse of a mysterious flying object.

Reclaiming the fear of the unknown and transforming it into joyful experience appears to be the shared collective mission for UFO festivals—most of which operate akin to small town fairs and community gatherings. Belief exists on a spectrum within the UFO tourist network: some are die hard believers, claiming hundreds of UFO sightings in their lifetime in hopes to evangelize more people and expose government cover ups, while others are simply in it for the pageantry. Following in the footsteps of manifest destiny, UFO festivals and tourist attractions offer up a new kind of folklore by reimagining the traditions of the American West as a way to invite friendly aliens to visit our planet. In America, believers and skeptics travel together along the cosmic highway in search of connection to the final frontier.

Images from this project were published in National Geographic.

Portrait of Julia Martinez dressed up as an abducted cow for McMenamin's UFO Festival in McMinnville, Oregon.

The "Welcome to Roswell" installation by artist John Cerney depicts a stranded UFO and alien family being assisted by locals.

A UFO sticker is placed over a cattle crossing sign as seen along the Extraterrestrial Highway near Rachel, Nevada.

Offerings for aliens at the UFO Watchtower in Hooper, Colorado.

Candance, a part time employee at the UFO Watchtower says this is "a safe space for people who have had experiences," claiming to have documented 138 UFO sightings in Hooper, Colorado since the year 2000.

A group of friends dressed up as extraterrestrial "Queen Bees" for the Alien Parade at McMenamin's UFO Festival in McMinnville, Oregon.

Library at the UFO Museum in Roswell, New Mexico.

Vacationers from Planet Bucksnort walk in the McMinnville UFO Parade in Oregon. Visitors leave the UFO Museum in Roswell.

A VHS of the movie Contact is placed as an offering for aliens at the UFO Watchtower in Hooper, Colorado.

Various merchandise for sale at a gift shop in Roswell, New Mexico.

Alien mural on the Extraterrestrial Highway in Nevada.

Green River, Utah, is home to a former missle base that, now abandoned, has been dubbed by locals as "The New Area 51."

Planets and stars found on a parade float in Roswell, New Mexico.

The Little A'Le'Inn in Rachel, Nevada.

The architecture of the Roswell McDonald's is designed to look like a flying saucer to promote tourism.

Drawings of various flying saucers reportedly seen around the world on display at UFO Museum in Roswell, New Mexico.

An Earthship near Taos, New Mexico.

Connie and Bryan Booth show off their glow in the dark guns during the night parade in Roswell, New Mexico.

Believers look for UFOs on a tour outside of Sedona, Arizona.

The northern lights in Montana illuminate an otherworldly green color